Associated Builders & Contractors (ABC) of Wisconsin honored NCI-Roberts Construction with a Projects of Distinction Award for the Fulton Church remodel and addition. 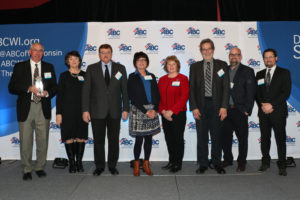 NCI-Roberts, along with guests from Fulton Church and Dimension IV Madison, accepted a Silver award in the category of General Contractor – Commercial – $2 Million to $10 Million on Thursday, February 14 at an awards banquet in Wisconsin Dells.

The project was judged in a rigorous process by a panel of construction experts based on a number of criteria, including safety, quality, owner satisfaction, execution and coordination, budgeting, difficult and unusual challenges and overall distinctiveness.

Read more about the Projects of Distinction Awards and ABC of Wisconsin.