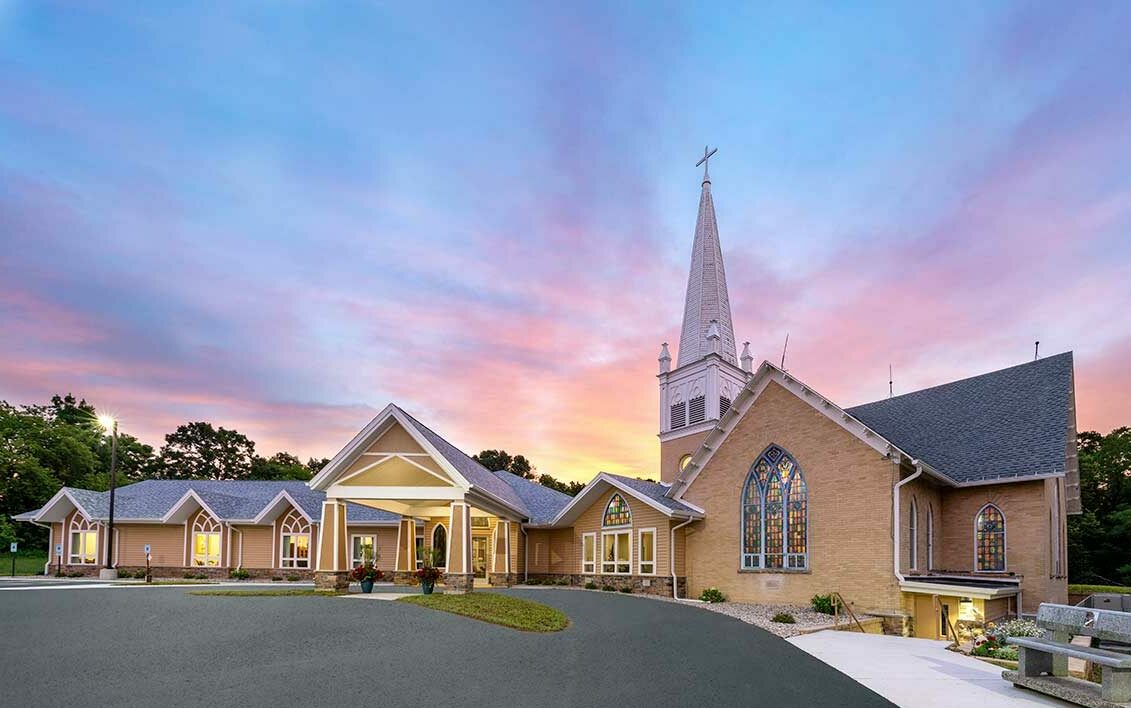 The church’s onsite cemetery limited its ability to expand from its original footprint and meant parking was further away than desired. Plus, portions of the church were not accessible. After decades of weighing new construction and historic preservation options, the congregation found, in the words of one member, an “ideal mix of honoring our past yet facing the future.”

First, NCI-Roberts constructed a new single-story, 5,830 square foot structure behind its cemetery. The floorplan incorporated fellowship space, a warming kitchen with pantry, nursery, fireside room, offices, bathrooms, and rooms for files, mechanicals, and storage. Above-window details tie into the original structure’s design. The space was the congregation’s first fully accessible building, complete with a new driveway and parking lot, and a covered zero-step entrance into the vestibule.

Just two weeks of services were held in the new fellowship hall in early 2020 before the COVID-19 pandemic restricted in-person gatherings and required the church to pivot use of the fellowship hall to a virtual worship “studio.”

Phase two was relocating the original church, built in 1899. NCI-Roberts demolished an addition constructed in 1964 containing office and education space. Then together with Heritage Movers, the contractor raised the remaining structure with roughly 20 jacks onto dollies about five feet high and moved it inch-by-inch to a new foundation next to the new facility. Prior to demolition, the contractor also removed and prepared stained glass windows from the old addition for re-installation, among other efforts to restore and maintain the memories it holds for the congregation.

Finally, NCI-Roberts relocated the original church and connected it to the phase one facility with entry link framing. A new 658 square foot addition was built that includes a sacristy and organ room.

Once the original structure was in its new location, the contractor began renovation of its interior. To enlarge the sanctuary space, two walls of the former organ room and a staircase were removed. NCI-Roberts improved accessibility by adding a ramp up to the altar, which required removal of all but a post of a former sacristy wall. The post was encased by a column, custom constructed to match three existing columns on the altar.

Accessibility was also improved by a new pew layout that created a center aisle for the first time in the church’s history, as well as two side aisles. The addition of a center aisle was important to the congregation for weddings and other significant services.

Stained glass windows salvaged from the 1964 addition were installed in the narthex and entry. Doors were relocated, and flooring and drywall were patched.

The narthex
Sanctuary with new center aisle
The sanctuary includes the original pews.
The new pew layout improves accessibility.
New sacristy
The organ was dismantled, cleaned and moved to its new space

Construction was completed in tandem with the lifting of some pandemic restrictions, and Burke Lutheran Church held its first service in the new, original church the Sunday before Easter in 2021.

"Moving a more than 100-year-old church is not something you see every day. It's been exciting to work with the congregation and assist them in their growth. It was really a monumental project to see to its completion."

"Thank you so much for making our dream become a reality. In the fall of 2019, NCI-Roberts began construction under the leadership of Mike Trapino, who oversaw the project vision, and Mike Chatfield, who oversaw the day-to-day operations. The two Mikes, as they were often referred as, did a fantastic job of communicating with our leadership and helping us understand how all the various pieces were interacting. Thankfully Mike and Mike kept us moving forward during the COVID restrictions doing what they could, when they could. What always impressed me was that when we did have problems, both Mikes were always there to stick up for us and look out for our best interests. At every step of the way, NCI-Roberts was there to help us navigate through the process and figure out solutions that kept us as close to the budget as possible. I would definitely recommend NCI-Roberts for future building projects."